HomeSermonsWHY JESUS CHRIST SUFFERED AND WHY HE IS GLORIFIED

WHY JESUS CHRIST SUFFERED AND WHY HE IS GLORIFIED 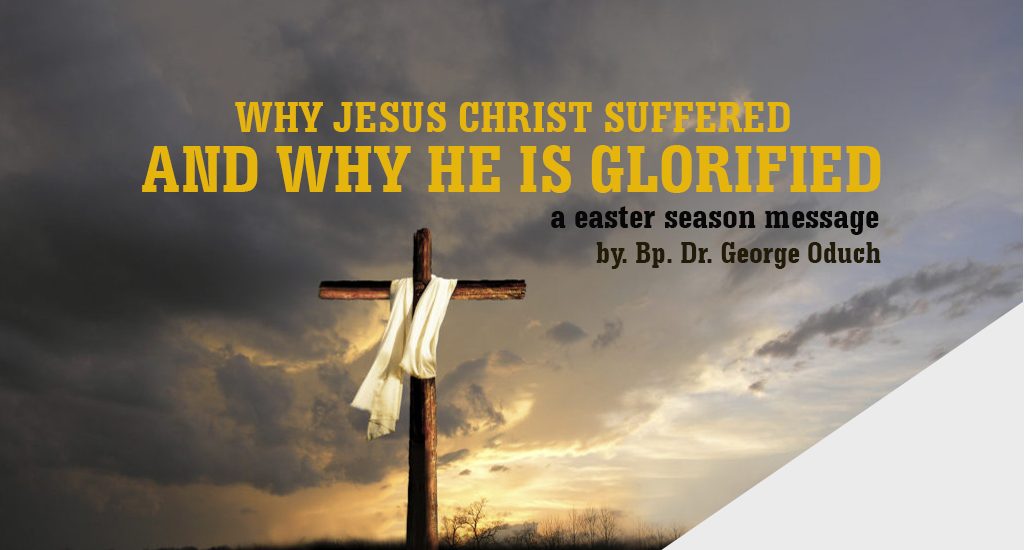 WHY JESUS CHRIST SUFFERED AND WHY HE IS GLORIFIED

“He said to them, ‘how foolish you are, and how slow of heart to believe all that the prophets have spoken! Did not the

Christ have to suffer these things then enter His glory?’ And beginning with Moses and all the prophets, he explained to them all what was said in the scriptures concerning Himself.”

Jesus spoke these words to two of His disciples who were traveling from Jerusalem to Emmaus as they were discussing in hopelessness all that had happened in Jerusalem in the recent days. Jesus himself had joined them though they did not recognize Him when He asked them what they were discussing. They thought that He was a visitor who did not know what had happened and they explained to Him how their hope was lost when Jesus they hoped would deliver Israel was killed by nailing to the cross. In addition they also told Him how they have been disturbed by the news they received that day from the women of their company who claimed to have seen visions of angels at the tomb of Jesus who told them that Jesus had risen, but Him, they did not see.

In answer Jesus did not minced His words. He told them that they were foolish and were struggling to believe for no good reason. Mind you these people were with Jesus for three years hearing Him quote scriptures after another about Himself and the fact that death would not hold Him.

“From that time Jesus begun to explain to His disciples that He must go to Jerusalem and suffer many things at the hand of the elders, chief priests and teachers of the law, and that He must be killed and on the third day be raised to life”.

According to Jesus, His disciples should have expected the suffering, death and the resurrection of the Christ. That is why He asked them the cardinal question: “Did not the Christ have to suffer these things and to enter His glory?” here Jesus was implying that there was a reason for His suffering and glorification.

To pay for the penalty of our sins. When Adam sinned the fellowship or the friendship between God and man was broken and hardship came into the life of man and enmity between woman, her seed (children) and the devil was pronounced because by obeying the devil rather than God Adam handed everything he was given to the devil (Genesis 3). Christ was the only one who qualified to pay for the sins of mankind because He Himself was sinless.

Prophet Isaiah saw this and said:

“But He endured the suffering that should have been ours, the pain that we should have borne… but because of our sins He was wounded beaten because of the evil we did. We are healed by the punishment he suffered; made whole by the blows he received. All of us were like sheep that were lost, each one of us going his own way. But the Lord made the punishment fall on Him, the punishment all of us deserved” Isaiah 53:4-6.

To reconcile us back to God: sin having been paid for through Christ’s suffering and death, reconciliation to God through Him is then possible when we receive Him by faith and turn away from our sinful lifestyle.

“At one time you were far away from God and were His enemies because of the evil things you did and devised in your hearts. But now, by the death of His physical Son, God made you His friends, in order to bring you holy, pure and faultless in His presence. You must off course continue on the firm and sure foundation and must not allow yourselves to be shaken from the hope you gained when you heard the gospel…”

Through this payment that Christ made with His life, one who has heard and accepted the gospel of salvation can be liberated from the power of sin that has enslaved the entire humanity in order to bring him into purity and holiness in God’s presence.

To deliver us from the curse of breaking God’s law:

Galatians 3:13-14 says that, “Christ delivered us from the curse of the law by becoming a curse for us, for it is written: ‘Cursed is anyone who hangs on the tree.’ He redeemed us that the blessing given to Abraham might come to the gentiles through Christ Jesus…”

When you read Deuteronomy 28 you will find that when people obey Gods requirement, God would bless them and when they break His laws, there are curses that follow them and these include: poverty, family breakups, incurable sicknesses, defeats in every area of life, premature death, etc.

When we come to Christ because He paid to release us from the curse of breaking God’s laws, we can renounce every curse the devil is enforcing upon our lives and claim deliverance and every form of blessing which Christ has already won for us. That is why Isaiah 53:5 says that, we are healed by the punishments that He suffered.

The Reason Why Christ is glorified:

It is the glory of God that got Jesus out of the grave. The same glory struck down the guards and paralyzed the powers of hell. It is the same glory that translated and exalted Jesus after the resurrection and placed Him according to Ephesians 1:21-22;

“Far above all rule and authority, power and dominion, and every title that can be given, not only in the present age but also in that which is to come. And God placed all things under His feet and appointed Him to be head over everything for the church.”

The reason why God glorified Jesus to such a high position is simply this: to give you who believes total victory over all the powers that may stand against you through Jesus under whose feet are all powers subjected, whatever their tittles and nature may be. This is awesome!!

And so Christ came and suffered to pay for the penalty of your sins, reconcile you to God, deliver you from the curse of breaking God’s. law and grant you victory over all the powers of the devil.

Which other time is better than now for you to surrender your life to Christ if you have not yet done so?

Please, If you are ready to surrender you life to Jesus say this prayer:

If you said that prayer from the bottom of your heart, you are saved by grace through faith in Jesus Christ. Find a Bible based church near you were you can fellowship in order to grow. Please let us know about your commitment to Christ Jesus. If you have any questions, you can reach us through the phones and mails. May God bless you.